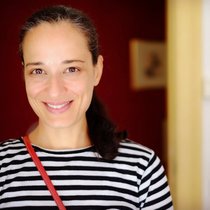 Einav Katan-Schmid is a postdoctoral researcher at the »gamelab.berlin« research group, where she is currently developing the project »Playing with Virtual Realities« in cooperation with Christian Stein and Tom Lilge. This project is an interdisciplinary collaboration between the embodied knowledge within dance and dancing, and the design of VR technology and practice.

Having a dancer’s background , Katan-Schmid’s main focus of research is the philosophy of dance. Her book »Embodied Philosophy in Dance; Gaga and Ohad Naharin’s Movement Research« was published by Palgrave Macmillan (2016). Katan-Schmid’s work lies at the intersection of practice and theory, and deals with questions that have both artistic and philosophical implications. Her philosophical research explores cognitive and communicative processes in dance and also deals with a broader discussion relating to perceptual processes, which are relevant to other media and techniques of thinking.

Alongside her work at the Cluster of Excellence »Image Knowledge Gestaltung«. Together with the choreographer and initiator, Monica Gillette, Katan-Schmid is developing the project »Dance for Empathy« a workshop’s device for using dance-knowledge as a platform for embodied research. Since July 2017, Katan-Schmid has also served as a core convener of the international network: »Performance Philosophy«.

Before joining »gamelab.berlin«, Katan-Schmid was a research fellow at the research group picture-act and body-knowledge, a guest professor at the program for MA in Choreography, HZT Berlin, a visiting scholar at the Center for Philosophy of Science, Boston University, and a lecturer at the College for Arts, »Midrash« Beit Berl, Israel and at the Faculty of Arts, Tel-Aviv University.

The philosophy of dance, philosophy of art, embodied and extended cognition, enactivism, aesthetics, American pragmatism, hermeneutics, phenomenology, performance studies, gender studies, and theories of emotions are her areas of specialization.