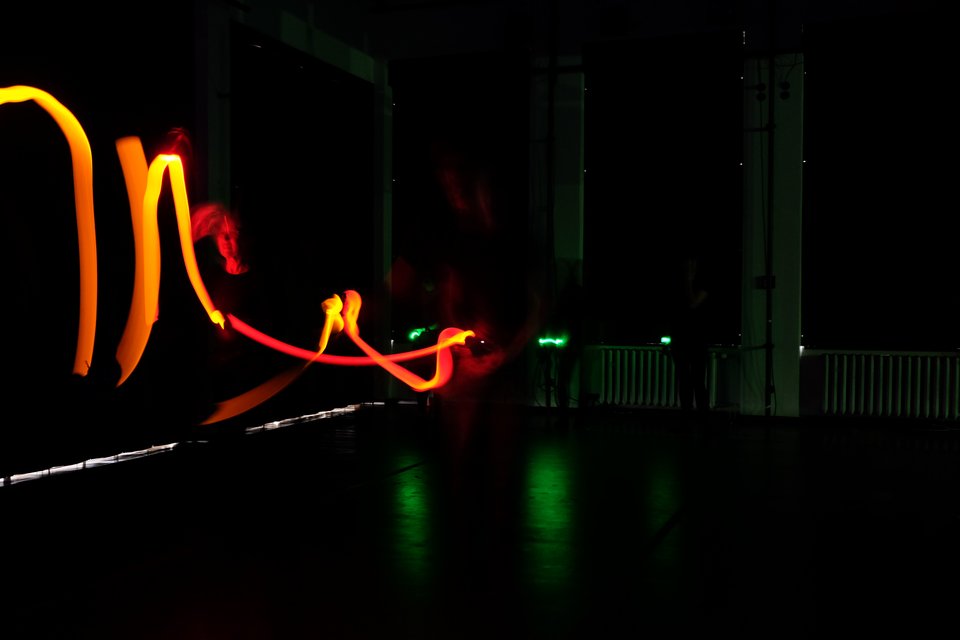 In the project »Exploring the Motion Space« we investigate the question of what reference points movement research can provide for designing architecture and objects. ›Movement research‹ is a very heterogeneous field encompassing empirical, theoretical, and practice-based approaches drawn from the arts, the humanities, the natural sciences, and scientific management.

The central focus is on debates about human bodily movements and physical as much as practice-based experiences whose potential for creating spaces can be fruitfully applied to the designing of livable spaces and artifacts. Endowed with its motion capacities, the human body can be seen as an instrument for exploring conceptual, processual, and sensorial facets of space.

With reference to the pedagogical application of movement pioneered by the Bauhaus, the aim of the project is to develop a curricular unit that incorporates experience-based knowledge in the training of architects and product designers. We thus seek to transfer knowledge gained from movement research and the current scientific discourse on space into courses at art, architecture, and design universities. This is realized by conducting workshops for students in which theory and practice are integrated into their own artistic and creative processes through exercises (learning through action and physical experience), input/discussion (on historical and scientific source texts), and reflection.

»Exploring the Motion Space« is a project that emerged from a working group at the Cluster of Excellence »Image Knowledge Gestaltung« at the Hermann von Helmholtz Centre for Cultural Techniques (HZK), a central institute of the Humboldt-Universität zu Berlin.

MARY COPPLE is a dancer and movement analyst. In the 1970s she gained a Diploma of Dance in Education from Dartington College of Arts, taught dance, and performed in multimedia theatre productions in England and Holland. She gained a Magister in French Philology (Linguistics major) and Information Science from the FU Berlin in 2002 and was a research assistant in gesture studies at the European University Viadrina from 2006–11. In 2012 she qualified as a Certified Laban Movement Analyst and now assists teaching the EUROLAB Certification Programs in Laban-Bartenieff Movement Studies in Berlin.

MICHAEL FRIEDMAN is a research associate in the Cluster of Excellence »Matter of Activity. Image Space Material« at the HU Berlin investigating diverse mathematical traditions from the 19th to the 21st century with a focus on their material practices. He also researches the various scientific, mathematical, and philosophical thought traditions of the 20th and 21st centuries, e.g. structuralism, post-structuralism, formalism, new materialism, and active matter. Recent publications: A History of Folding in Mathematics: Mathematizing the Margins 2018, and On Folding: Towards a New Field of Interdisciplinary Research, ed. with Wolfgang Schäffner, 2016.

SABINE HANSMANN is an architectural researcher who studied architecture in Stuttgart (Academy of Arts and Design) and Tokyo (University of the Arts). After working in architectural practices and as a freelance editor for the architectural magazine ARCH+ from 2013 – 2018 she was a member of LIA at the TU Berlin and the Cluster of Excellence »Image Knowledge Gestaltung« at the HU Berlin. Both provided the framework for, amongst others, the Raummaschine (Space Machine), a kinetic installation at the Martin-Gropius-Bau Berlin (2016), and her doctoral thesis Monospace and Multiverse. An Architectural Exploration of the Sainsbury Centre for Visual Arts with Actor-Network-Theory.

JOACHIM KRAUSSE, historian of architecture and design, is a retired professor of design theory at Anhalt University of Applied Sciences in Dessau, associated researcher in the Cluster of Excellence Image Knowledge Gestaltung at the HU Berlin, and has been a permanent collaborator of the architectural magazine ARCH+ since 1991. He has directed film documentaries on the history of housing and dwellings, curated exhibitions, and published widely on the work of Buckminster Fuller, e.g. Your Private Sky, R. Buckminster Fuller, 2 vols. 1999, 2001, republished 2017. He now teaches in the MSc Program COOP Design Research at the Bauhaus Dessau.

FRIEDERIKE SCHÄFER is an art historian and research associate for photography at Karlsruhe University for Arts and Design, and teaches in the MSc Program COOP Design Research at the Bauhaus Dessau. She studied art history and North American studies at the FU Berlin, in Seattle (University of Washington), and New York (Bard Graduate Center). After graduating, she worked on contemporary art exhibitions, such as dOCUMENTA(13), and re.act.feminism2—a perform¬ing archive, and co-curated the project Das Schwarm-Prinzip. Performative und politische Schwärme in der Kunst (2012 at NGBK, Berlin, and 2013 at Kunstverein Harburger Bahnhof, Hamburg). From 2013–16 she was a member of the Cluster of Excellence »Image Knowledge Gestaltung« at the HU Berlin, which provided the framework for her doctoral thesis on artistic strategies of claiming space in the 1960s and 1970s in New York.