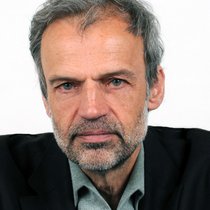 Horst Bredekamp is Professor emeritus of Art History at Humboldt-Universität zu Berlin and has been a Permanent Fellow of the Institute for Advanced Study from 2003 until 2012. In 2000, he founded the project »The Technical Image« at the Hermann von Helmholtz Center for Cultural Techniques, which under his leadership seeks to develop visually critical methods, a theory of pictorial knowledge in the fields of science and technology and medical visualizations. From 2008 onwards, Bredekamp has directed the DFG (German Research Foundation) Centre for Advanced Studies in the Humanities and Social Sciences »Picture Act and Embodiment«, which merged into the project »Picture Act and Body Knowledge« with the foundation of the Cluster of Excellence »Image Knowledge Gestaltung«. As one of the Founding Directors of the Humboldt Forum since October 2015, Bredekamp has been acting as part of the advisory board, which is setting thematic focal points and developing the interaction of all stakeholders in the Humboldt Forum for a period of initially two years.