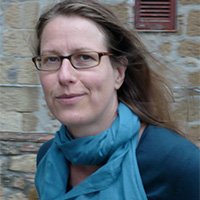 Roles
Interdisciplinary Laboratory
Executive Board, Schwerpunktleitung Active Matter
Roles
Interdisciplinary Laboratory
Postdocs
Priority Area
Active Matter
Projects:
Science of Structures and 3-D Code Models in Gestaltung. Towards an Understanding of Design Processes
Karin Krauthausen is a literary scholar and cultural theorist. She earned her doctorate in 2008 with a thesis on drawing and sight in Paul Valéry’s work. From 2007 to 2011, she was a scholarship holder at the Max Planck Institute for the History of Science. She coordinated the doctoral network PhD-Net »Das Wissen der Literatur« (The Knowledge of Literature) at the Humboldt-Universität zu Berlin until October 2013. In November 2013, she joined the Cluster of Excellence »Image Knowledge Gestaltung. An Interdisciplinary Laboratory«, where she researches in the projects »Science of Structures and 3D Code« and »Models in Gestaltung«. Since January 2016, she has co-led the cross-project priority area »Active Matter« within the Excellence Cluster together with Peter Fratzl, Michael Friedman and Wolfgang Schäffner. Between September and December 2017, she was a professor for artistic
research at the Academy of Art and Design in Basel (FHNW).