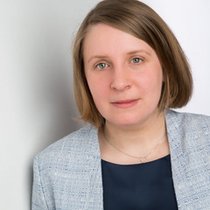 Roles
Interdisciplinary Laboratory
Fellows (Deutschlandstipendium)
Priority Area
Image & Action
Maren Isabel Fritz has been a holder of the »Deutschlandstipendium«-Scholarship in the theme class in the Excellence Cluster »Image Knowledge Gestaltung« since April 2016. Having gained a Bachelor’s degree in Philosophy and Art and Visual History from the Humboldt-Universität zu Berlin, she is continuing her studies at the university and enrolled on Master’s in Philosophy in October 2017. Her areas of interest include ancient and practical philosophy and phenomenology. She is particularly interested in the analysis and ethical evaluation of current social issues.
As a Germany Scholarship holder in the Excellence Cluster, she spent two years based in the priority area »Image & Action«, where she investigated the relationship between healthcare professionals and patients, and addressed the question of how to ensure dignified treatment of patients. Her research played a crucial role in the concept of her undergraduate dissertation, »Preserving the Dignity of Patients? – Human Dignity in the Doctor-Patient Relationship«.

Since April 2018 she has focused on phenomenological theories of perception in the priority area »Philosophy and Cultural History of Perception«. Lambert Wiesing’s »The Philosophy of Perception« (2009) serves as the point of departure for her research, which will culminate in a protreptic description of a perception process and contribute to the interdisciplinary dialogue within the theme class.