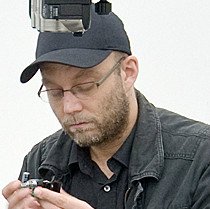 Roles
Interdisciplinary Laboratory
Additional scientific staff
Priority Area
Collecting & Exhibiting
Projects:
Mobile Objects
Sebastian Döring is a research assistant in the Hermann von Helmholtz Centre for Cultural Techniques. He studied Cultural Studies and Media Studies at the Humboldt-Universität zu Berlin. He has brought media to the stage of the Media Theatre since 2007. He curated the HU Berlin’s Media Archaeological Fundus from 2009 to 2012. Alongside Jan-Peter E.R. Sonntag, he conceived the »conceptual art project apparatus operandi« from 2012 to 2015. He has co-edited »Schaltungen« (working title), part of the collected writings of Friedrich Kittler, since 2013.

The sub-project »Hybrid Object Presentations« is based in the Hermann von Helmholtz Centre for Cultural Techniques. In close collaboration with the other two sub-projects, the project is developing three examples of exhibition scenarios that unite material and virtual objects from the collections of both the university and the Museum für Naturkunde (virtual physicality) whilst also making these objects collectively presentable and accessible to the public. The aim behind these scenarios is to prepare conceptualisations, drafts and experimental utilisations for the future Object Laboratory.